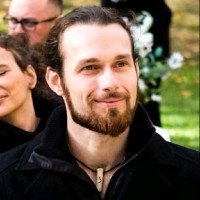 Hi! My name is Tomy Aumont and I'm an electrical engineering graduate from École de technologie supérieure (ETS) since 2017. In 2018, I joined the Center for Advance Research in Sleep Medicine (CARSM) in Dr. Julie Carrier's lab as a masters student in biomedical sciences at University of Montreal, co-supervised by Dr. Jean-Marc Lina from ETS. My research field of interests are in signal processing and neuroimaging methodology, more specifically using high-density electroencephalogy (hd-EEG) and magnetoencephalography (MEG). Currently, I'm studying changes in functional connectivity of the generators of sleep's slow waves. I'm a social guy who's always happy to discuss with people in thirst for science and technology.

To view my poster, click on the 'Presentation' or 'Zoom link' button below my photo.

Thanks for passing by!

Sleep slow waves have been recently classified into functionally relevant slow and fast groups exhibiting different connectivity dynamics along their transition from down to up state. Slow waves classified as slow switchers (depolarizing slowly <1.2Hz), demonstrated an increasingly stronger global connectivity index on the EEG than the faster ones until the up state is reached. Furthermore, older subjects, which produces a greater ratio of slow slow waves than fast slow waves, tends to have more difficulties to disconnect during deep sleep than the younger ones. In this study, we proposed to use simultaneous MEG/EEG recordings of 24 healthy participants (12 young, 12 older) to detect these slow waves and localize their activity on the cortex level. The objective is to see if there is a similar dynamic occurring on the cortex than the scalp and assess if aging is disrupting it. As expected, our results showed that slower waves recruit neurons from a broader cortical surface than the faster ones. This is in agreement with previous studies showing that slower slow waves propagate further than faster waves and have more extended sensor-level connectivity.