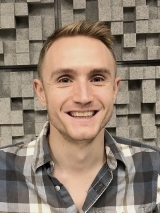 My name is Valentin, I am a postdoctoral fellow at the Sequence Production Lab (McGill University, Department of Psychology) with Pr. Caroline Palmer. I am currently studying non-linear dynamics properties of auditory-motor synchronization. I completed my PhD in Human Movement Science at the University of Montpellier (France) in 2017. My broad research interests are humans' rhythm perception and production skills.

To view my poster, click on the 'Presentation' button below my photo.

Previous studies have shown large individual differences in how people synchronize their movements with sound. Yet little is known of how social turn-taking contexts influence these individual differences. We used delay-coupling models to capture anticipatory synchronization with and without social context. We asked participant pairs to first produce melodies at their spontaneous (uncued) rate. Then they synchronized their productions with a metronome whose rate was set to match their spontaneous rate or their partner’s rate, both in Solo (alone) and Joint Turn-taking conditions. In the Joint condition, partners showed greater synchrony when the metronome was set to their rate than to their partner’s rate. Partners’ asynchronies were larger (more anticipatory) in the Turn-taking condition when the disparity in partners’ spontaneous rates was greater. Delay-coupling models revealed that coupling strength (𝑘) and time delay (𝜏) increased when participants tapped at their partners' rate, suggesting that they anticipated more to maintain synchrony. Overall, individuals’ synchronization with a metronome that was cued at their partner’s rate was influenced by the social turn-taking context. Delay-coupling models' parameters, especially coupling strength and time delay, can capture properties of solo and group synchronization.