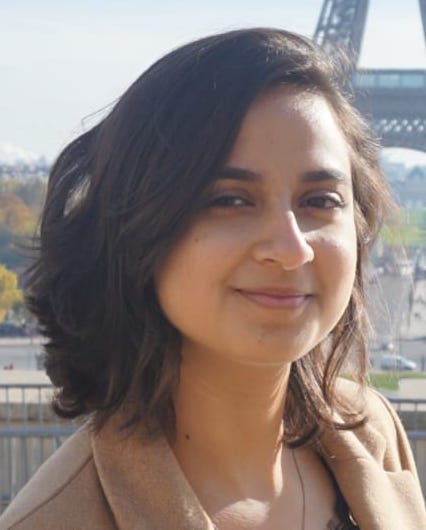 Hi there! My name is Anisha Khosla and I am a PhD student at the University of Toronto, co-supervised by Dr. Jennifer Ryan and Dr. Morris Moscovitch.

Today, I am presenting my work on how visual exploration of scenes changes with healthy and pathological aging. In short, we show that eye movements differ between groups that have varying levels of decline in the medial temporal lobe, a brain region vital for memory and learning. This is important because it suggests that eye-tracking tasks may be used for the detection of pathological aging.

Please visit me on Zoom (link below) if you would like to discuss the poster and/or for a walk-through of the poster. I would love to hear from you. Thanks for stopping by!

Memory-related viewing behavior is diminished in older adults, and lacking in amnesic cases who have reduced integrity of the medial temporal lobe (MTL), including the hippocampus, a region involved in memory. Given the link between viewing behavior and memory, the present study investigates perturbations in eye movements as a consequence of declining MTL integrity with normal and abnormal aging. Younger adults, healthy older adults, and older adults with amnestic mild cognitive impairment (aMCI) participated in a scene viewing task in which they freely viewed images presented on the screen as their eye movements were monitored. Amnestic MCI is typically associated with volume declines in the MTL, specifically the hippocampus, and is associated with subjective and objective cognitive impairment. Therefore, this group may provide key understanding of how eye movements are perturbed due to abnormal aging. We analyzed eye movement metrics to quantify the manner and extent of scene exploration. A multivariate analysis, partial least squares (PLS), was used to test if the three groups differed on the eye movement metrics. PLS results revealed that the pattern of viewing for aMCI adults was associated with more visual sampling, yet their effective area of exploration was limited (i.e., lower root mean square deviation), saccade amplitude was lower, and viewing entropy was higher. The opposite pattern was expressed by younger adults; older adults did not express either pattern. These results demonstrate that, even in the absence of an overt memory task, patterns of eye movements recorded during free viewing can be used to differentiate groups  with varying integrity of memory-related brain regions. Such findings suggest that eye movements may reveal disturbance in the moment-to-moment formation of representations in memory.